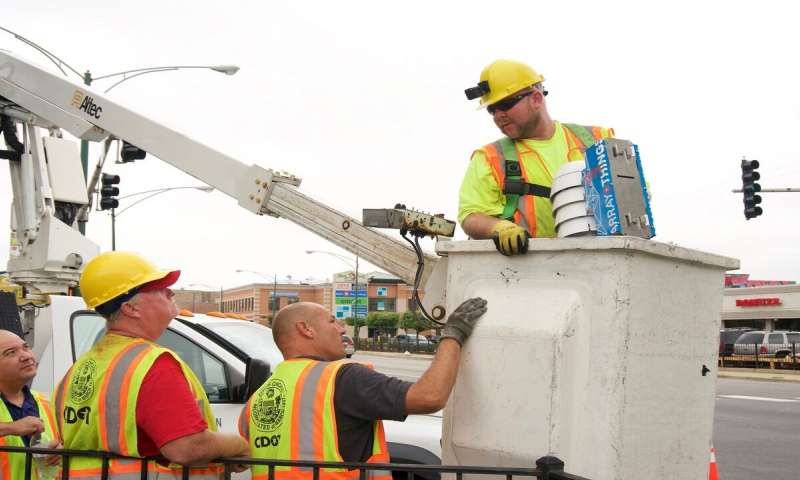 Workers from the Chicago Department of Transportation install a node for the Array of Things, a distributed sensing network for urban environments, at Damen and Archer avenues in downtown Chicago. Credit: Rob Mitchum/University of Chicago


Understanding the workings and behaviors of a city requires knowledge of the different processes that allow people and other biological organisms to live and thrive, as well as understanding of their interrelationships—many of which are complicated and have yet to be deeply explored.

“Cities are immensely complex, with many facets and interactions within them,” said Pete Beckman, a computer scientist at the U.S. Department of Energy’s (DOE) Argonne National Laboratory. “For instance, weather influences human movement; air quality affects long-term health; and availability to transportation helps determine opportunities ranging from employment to social interaction. What we need is a new generation of methods and tools that can help us find relationships hidden within the growing volume and diversity of data that are being collected about cities.”

Central to these methods is machine learning—the increasingly potent process by which computers train to make predictions or determinations from large quantities of data. Machine learning has revolutionized many parts of our lives, from the game of chess to facial recognition systems, and it is now coming to our cities.

“With machine learning, we can take the data that comes from experiments or observations and we can explore the validity of existing theories or hypothesize new ones regarding the interrelationships among urban systems and processes,” explained Beckman, who helps apply data science to urban challenges.

Because cities are so complex, the issues to which Beckman and his Argonne colleagues are applying these techniques span the gamut from combating pollution to improving pedestrian safety, and from predicting crime to understanding the dynamics of the spread of communicable diseases. Maximizing one of these parameters, he said, may impact others, making machine learning an optimal technique for finding relationships in a system too complicated to describe with a theory.

Argonne’s work at the intersection of machine learning and the urban environment leverages the laboratory’s deep and broad multidisciplinary teams and powerful scientific tools to solve some of society’s most complex problems. This can be seen most directly in the National Science Foundation-funded Array of Things (AoT), a partnership between Argonne, the University of Chicago, and the City of Chicago. AoT is a network of over 100 programmable, multisensor devices (nodes) deployed throughout Chicago, on track to grow to 200 by late 2019.

Each node hosts two cameras (sky- and ground-facing), a microphone and sensors to measure factors that impact the urban environment, such as climate, noise and air quality. The node also hosts powerful computing to process the data locally and in real time.

“A key advantage to using Waggle for the Array of Things is that nodes can locally run machine learning software without the need to maintain contact with or feed data back to a central server,” said Charlie Catlett, AoT principal investigator and a computer scientist at Argonne and the University of Chicago.

Though each generation of nodes (of roughly 100 nodes deployed) is standardized and consistent, scientists can remotely program not only the sampling algorithms for standard sensors, but also provide machine learning code to analyze images, sound or combinations of sensor values.

“Machine learning within the nodes means that we have not only deployed a traditional sensor network, but we can also now design software-defined sensors, measuring factors that are beyond the reach of electronic sensors, such as the flow of vehicles through an intersection or the typical size of group that uses a public park,” Catlett said. “Without any need to change the hardware installed on the street pole, we can push new software to add software-defined measurements, addressing a nearly unlimited range of questions.”

This differs from most sensor networks, whose nodes consist of a sensor that feeds information back to a central database, but that lack any capability to remotely modify the sensing strategy, much less add new measurements. Typical sensor networks are designed for a specific set of measurements, so once they are installed, the only way to enhance them is to replace them with a new installation.

Devices like AoT nodes that are capable of remotely programmable machine learning “at the edge” can also provide an additional level of detail and analysis surrounding different aspects of the urban environment.

“What we find is that traditional sensing and available urban data provide only part of the story,” Catlett said. “For more complex urban phenomena—like trying to figure out the fine details of the safety of an intersection—we had to develop a system that could be remotely programmed with machine learning code to interpret images, sound and other data.”

“We do this on the street—at the edge of the network—rather than in the cloud,” he added.

Ultimately, Catlett said, AoT seeks to incorporate a degree of autonomy, where a node could change its operating parameters based on something it detects in the environment.

“For instance, say you wanted to have a way to look at surface flooding on city streets, but you knew that only mattered when humidity reached a certain level,” he said. “We want our nodes make a decision about how they operate based on their observations.”

A multidimensional sensor network that can learn and adapt, like the AoT, could allow researchers to manage trade-offs and identify potential correlations between different urban phenomena. The complexity of a city, in Beckman’s view, makes machine learning the only “tractable” way scientists have of getting a handle on the big questions that face urban planners and residents.

“There’s no theory that says that, for every occupant you add in the following way, the city will behave in a particular way,” he said.

Having a machine-learning-enhanced network like AoT gives scientists a platform to explore some of the more complicated questions cities face.

“We now have an experimental instrument for the city to begin to ask all kinds of very specific questions, and the instrument is programmable,” Catlett said.

A touch of zirconium to better catch the sun

Object identification and interaction with a smartphone knock 2 min read

Object identification and interaction with a smartphone knock

Hydrogen fuel is getting buzz, but here's why it hasn't gone mainstream 3 min read

Hydrogen fuel is getting buzz, but here's why it hasn't gone mainstream