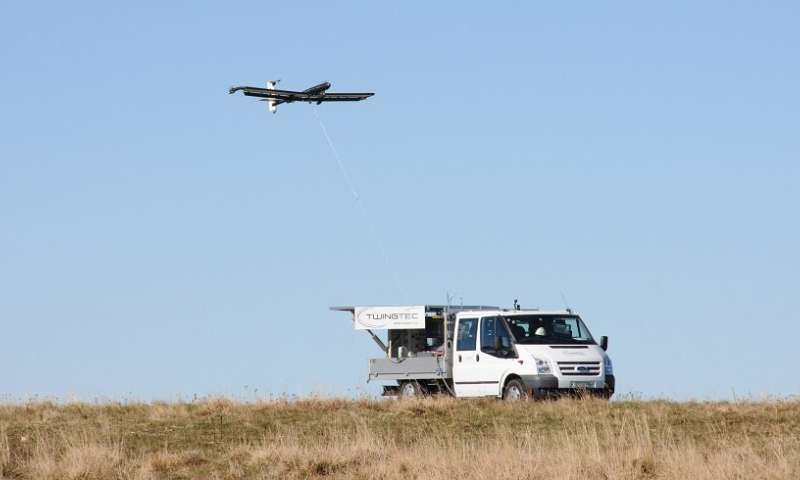 Successful test flight on the heights of the Chasseral in autumn 2018: TwingTec prototype T 28, a device with a wing-span of three meters, took off independently from its base vehicle, climbed into the air, circled autonomously in the air for 30 minutes, produced electrical energy and finally landed safely again on the launch platform. Credit: Empa


Anyone who has ever steered a child’s kite knows the feeling: The wind grips the kite and pulls the string. The string is quickly tensioned, the spindle rotates between the fingers and is difficult to control. The question arises: Could this wild energy also be used to generate electricity?

Rolf Luchsinger is CEO of Empa’s spin-off TwingTec, founded in 2013. This makes TwingTec one of the first companies to develop airborne wind power plants—and places it one step ahead of some of its competitors. The young company employs nine people at its headquarters in Dübendorf.

The idea behind the project is simple, but the practice is tricky: meteorologists know that at a height of 500 meters wind power is up to eight times stronger than at a height of 120 meters—which is the hub height of modern wind turbines. A kite could make use of this strong wind if it screws its way up in circles and pulls a rope from a pulley. A generator that produces electricity is connected to the axis of the rope pulley. As soon as the rope has been unwound, the kite glides back towards the ground station; in the meantime, the rope is wound up and the ascent begins anew. “The big challenge is not flying itself,” says Luchsinger. “The problem is to take-off and land automatically. After all, the kite power station should be able to supply electricity without being controlled by humans.