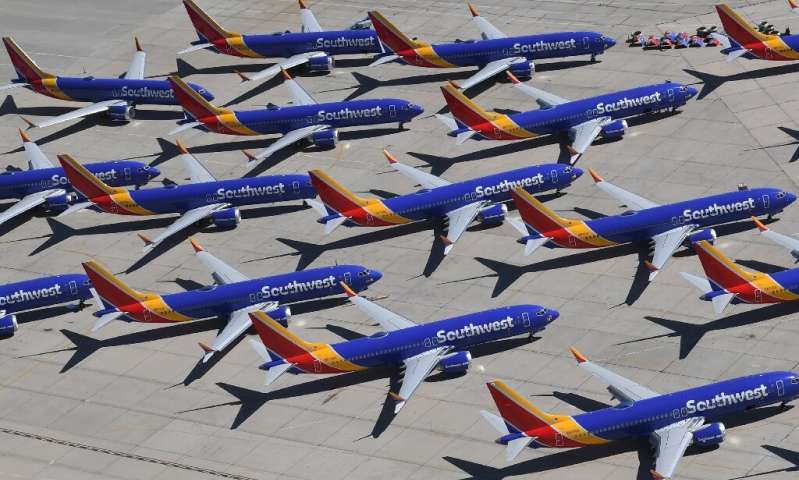 Boeing delivered just 63 commercial planes compared to 190 a year ago, due to the grounding of its topselling 737 MAX which continues to dent results


Boeing on Tuesday reported another steep quarterly drop in commercial plane deliveries due to the grounding of the 737 MAX but confirmed it still plans to win approval get those jets back in the air this year.

The aerospace giant delivered 63 aircraft in its commercial program in the three months ended September 30, down from 190 in the year-ago period, Boeing said in a statement.

The figures are the latest demonstration of the hit to the company’s finances and prospects because of the MAX, which was taken out of service in mid-March following two deadly crashes that killed 346 people.

Boeing has trimmed production of the plane and been forced to store hundreds of new aircraft that cannot be delivered.

The benchmark is closely monitored by Wall Street as a sign of profitability because plane deliveries are closely tied to revenues.

Analysts are projecting much lower 2019 profits for Boeing following a big drop in sales.

The release on deliveries came as Boeing faced fresh questions on its chances for winning regulatory approval in 2019 to resume flights on the MAX following a Wall Street Journal article that said questions from European aviation regulators about the jets’ flight-control systems could delay approval.

The FAA has previously signaled it could certify the MAX before the European Union Aviation Safety Agency and other bodies but the report initially weighed on Boeing shares Tuesday.

EASA said in an email that it is still assessing the MAX’s latest flight control computer software.

“We do not at this stage have any specific concerns resulting from that assessment that would mean that we could not agree to a coordinated return to service,” EASA said.

“However the assessment has not yet been completed. We are in continuous contact with both the FAA and Boeing.”

Boeing said it continues to work with EASA and that its timeframe has not changed.

“Looking forward, we continue to target regulatory approval for the 737 MAX return to service this quarter, though it’s the FAA and other global regulators who ultimately will determine the timeline,” a Boeing spokesman said.

Boeing also defended itself from a lawsuit filed in Texas by the Southwest Airlines Pilots Association that accused the aerospace company of “deliberately misleading” them over the safety of the 737 MAX.

The grounding of the 737 MAX since March eliminated more than 30,000 scheduled Southwest flights and caused over $100 million in lost wages for pilots, SWAPA said.

The pilot group also seeks compensation for costs connected to a investigations of the MAX, including retaining legal counsel and assembling “thousands of potentially relevant documents” for authorities, according to the complaint.

Boeing said it will fight the suit.

Boeing “has the greatest respect for the men and women who fly for Southwest Airlines,” a company spokesman said.

“We believe this lawsuit is meritless and will vigorously defend against it. We will continue to work with Southwest Airlines and its pilots on efforts to safely return the MAX to service.”

Shares of Boeing partially recovered from a stumble on Tuesday morning and were down 0.4 percent at $375.14 near 1700 GMT.

Future intent: Would you let an automated car do the driving? 3 min read

Future intent: Would you let an automated car do the driving?